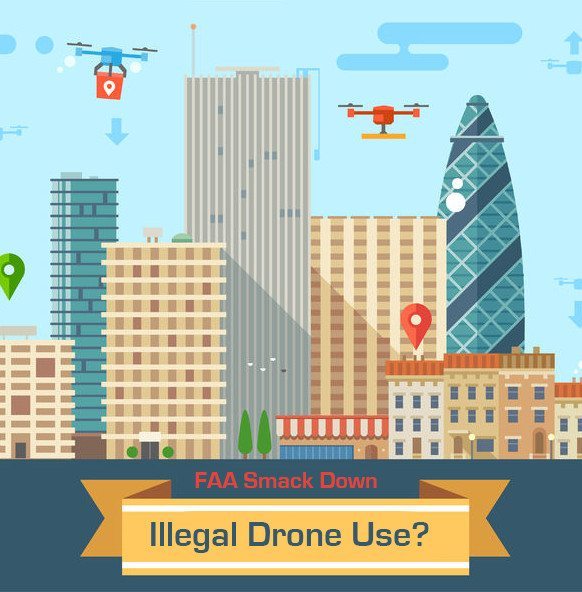 Wondering how the FAA Civil Penalty Letter and recommended $1.9 million dollar fine affects your Section 333 business?   We break it down for you in this Part 1 video “Anatomy of a FAA Enforcement Action For Illegal Drone Use.”

Did SkyPan International thumb it’s nose at the FAA and commercial drone regulations?

ANATOMY OF AN FAA ENFORCEMENT ACTION FOR ILLEGAL DRONE USE

We should note that this is a recommendation at this point. Sky Pan International will have the opportunity to contest the facts, deny the facts, and tell the FAA that they’re wrong. They can at that point decide that they want to negotiate a fine of a lessor amount or simply refuse to pay the fine. At that juncture, the FAA will need to decide whether or not they’re going to bring an enforcement proceeding against the company and try and enforce that fine. Here we go, let’s take a look at this and do a little bit of an anatomy of an FAA enforcement action against Sky Pan International.

So let’s break it all down for you. The FAA press release is really interesting because it shows that the FAA wants to send a message to the commercial drone operator community that they are serious about the drone regulations that they have passed. They are serious about the Section 333 process that’s going to get us between now and the adoption of the drone regulations into law and if you don’t comply they will follow up with fines. We know we talk to people every day who’ve received cease and desist letters from the FAA because they were flying their drone commercially without an exemption. The big question has always been what happens if you get a cease and desist letter and you continue to violate the FAA Section 333 process, you don’t get a civil COA or some other COA in order to be able to fly and there have been a lot of people have said they don’t believe the FAA is serious about this. We think that there is no instance ever of the FAA fining anyone for flying a commercial drone without a section 333 exemption and of course, that was true until the other day when this press release was released. The reason why that was a very dangerous argument always and one we would push back on is because it takes a long time before information concerning these investigations to become public and so this is an investigation that has been going on since 2012 and we’re just learning about it in 2015.

The FAA does not send cease and desist letters for no reason. If they re-send a cease and desist letter and you violate that willfully, you will get fined by them. It’s only a question of time. This is just one example of what can happen to you if you play fast and loose with the rules. But here’s what the FAA has had to say about this. They say between March of 2012 and December of 2014, Sky Pan International conducted 65 unauthorized operations in some of the most congested airspace that we have in the United States and some of the most heavily populated cities. Essentially, most of the violations concern operations between 2012 and 2014 in New York, in downtown New York.

There are any number of violations that will go through that the FAA is using in order to support their recommended fine, but when you’ve been found to have 65 unauthorized flights, you should realize you’ve got a problem. We did contact, Les Door, who is the spokesman for the FAA about this press release and about this issue and we asked him point blank whether or not part of the fine is a result of flying without a Section 333 exemption and Mr. Door confirmed that in fact the company, Sky Pan International, now has an exemption, but at the time of these violations it did not have an exemption. So it was flying commercially before it got an exemption and Mr. Door further confirmed that the fine is based in part on flying commercially without a Section 333 exemption as well as without the appropriate civil COAs, air worthiness certificates, etc. This concept that somehow you can fly without an exemption and get by with it is false.

So, what do we know about Sky Pan. Well, they appear to be a big time commercial drone operation. They’ve been around for 27 plus years with experience in aerial photography and videography. Essentially, this is a company that has been doing aerial photography and videography by manned helicopter and manned flight for a long time. In 2008 or so, it appears they integrated an unmanned helicopter of their own design and build into their fleet of aerial vehicles and they started flying that helicopter to capture aerial photography and videography for customers and they did it outside of the FAA regulations. So they boast a lot of experience, they’ve been around for a long time and as you’re going to see that there’s a big history here between FAA and the owners at Sky Pan International.

One of the things that we’ll talk about is that the FAA did a long investigation here including Subpoenas to both Sky Pan and its customers in order to get the information to support the fact that these flights occurred, that they were in unmanned vehicles, that they were at certain altitudes, etc. and that they were commercial. So we’re going to talk a little bit about the enforcement aspect and the investigation aspect and what the FAA will do when it receives notice of the violation.

The main thing that we also want to emphasize here is that a lot of the citations, the violations that are included in the FAAs letter involve flights that are clearly marketed on Sky Pan’s website. So while a website video or You Tube video in and of itself will not create enough evidence for a violation, it certainly can support a violation and we’re seeing here that Sky Pan’s marketing was all over the web. They were really pushing heavily on the concept that they were flying this unmanned aerial helicopter to get amazing flights and these are flights that cost tens of thousands of dollars or hundreds of thousands of dollars and they were really pushing hard on the information they were putting on line and of course, when you do that, you just push yourself more in the spotlight.

Let’s take a look at the Sky Pan International FAA enforcement division letter that was sent to the president of Sky Pan International on October 6, 2015. When the Department of Transportation completes its investigation to the point where it believes that in fact there has been a violation, it has several enforcement options, one of which is to send what is called a civil penalty letter and this civil penalty letter puts the company on notice that there has been a violation. You can see here that based on the facts and circumstances FAA believes that Sky Pan is engaged in the following flights and they list them out: March 21, 2012, one flight for a project at the 35 W 15th Street address. The reason that they have these addresses is because as well see, the subpoenas that they issued to the customers of Sky Pan when Sky Pan tried to avoid subpoenas sent to them. There is a lesson to be learned here and that is that when you’re outside the regulations, you put your customers at risk and those customers could end up getting subpoenas and end up having to hire their own lawyers to address the FAA inquires.

What we have here are some of the substantive notations in the letter. Sky Pan operated on those flights listed above without receiving an air traffic control clearance from the APC facility and one of the things you have to do before you fly is you have to get clearance from the tower. They did not do that and they were in downtown New York in very highly congested air traffic and they were flying as you’ll see at altitudes that were up into potential air traffic as well as helicopter traffic.

Sky Pan operated the aircraft and it was not equipped with a two-way radio. Now this is interesting because normally when you get your Section 333 exemption, the FAA exempts you from that requirement. Since they did not have their 333 exemption at this point, then the FAA’s position is they were required to comply with all of the Federal Aviation regulations that applied including those that would normally be exempted by the FAA for drone operations and again in 6 we see the same thing. No transponder with altitude reporting equipment. That’s one that the FAA would exempt you from having to comply with if you went through their process.

Note that the aircraft had not been registered with the FAA as a requirement of all Section 333 owners to get an N number to register their aircraft with the FAA so if something bad happens, they can trace that drone back to its owner. You can see here that they did not have an air worthiness certificate for their helicopter and that is another item that the FAA will give you an exemption from showing an equivalent level of safety for a drone, if you apply for a Section 333 exemption and of course, they did not get their COA, their certificate of authorization for their flights, and the FAA finds that they operated in a careless or reckless manner as a result and you’re going to see all of these CFRs here are individual violations. The FAA relies on 49 USC § 46301(A)(5) for a maximum fine of $11,000 per each violation and in this instance they’re recommending a fine of $1.9 M against Sky Pan and it’s signed by the attorney for the enforcement division of the northeast team of the FAA. This is the type of thing that you’re going to be seeing if you operate outside the 333 Ancoa process.

That will do it for this edition of the Anatomy of an FAA Enforcement Action taking a look at the Sky Pan $1.9M fine and next time we’ll take a look at the subpoenas that were issues previously and take a deeper look into the history of this case so we can better understand why the FAA went after Sky Pan and you’ll be able to learn lessons about how to govern your 333 operation of this case study.