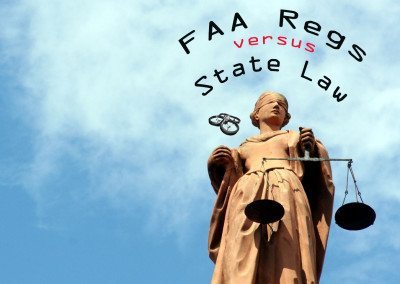 The FAA has stated clearly that states can not regulate drones if those regulations conflict with FAA jurisdiction over the national airspace.

Some quotes from the FAA telling States to back off drones:

Looking for information about whether your state has drone laws that might apply to you?

“This bill would extend liability for wrongful occupation of real property and damages to a person who operates an unmanned aircraft or unmanned aircraft system, as defined, less than 350 feet above ground level within the airspace overlaying the real property, without the express permission of the person or entity with the legal authority to grant access or without legal authority.”

“This bill would make a person who knowingly and intentionally operates an unmanned aircraft system on or above the grounds of a state prison or a jail guilty of a misdemeanor. The bill would make these misdemeanor provisions inapplicable to a person employed by the prison or jail acting within the scope of his or her employment, or a person who receives prior permission from the Department of Corrections and Rehabilitation or the county sheriff. By creating new crimes, the bill would impose a state-mandated local program.”

“This bill would create the Unmanned Aircraft Systems Task Force, comprised of 10 members, as provided. The bill would require the task force to research, develop, and formulate a comprehensive policy for unmanned aircraft systems. The task force would be required to submit, among other things, a policy draft and suggested legislation pertaining to unmanned aircraft systems to the Legislature and the Governor throughout the term of the task force, on or before January 1, 2018. The bill would provide that these provisions are repealed on January 1, 2022.”

“Surveillance by a Drone; Prohibiting a person, a state agency, or a political subdivision from using a drone to capture an image of privately owned real property or of the owner, tenant, occupant, invitee, or licensee of such property with the intent to conduct surveillance without his or her written consent if a reasonable expectation of privacy exists; authorizing the use of a drone by a person or entity engaged in a business or profession licensed by the state in certain circumstances, etc.”

“AN ACT relating to images captured by unmanned aircraft and other images and recordings; providing penalties.”