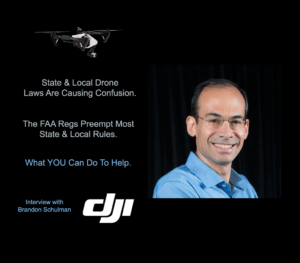 In this interview, drone attorney and DJI policy wonk Brendan Schulman is interviewed by drone lawyer Enrico Schaefer at the 2015 International Drone Expo (IDE).  What should Section 333 commercial and recreational drone operators do to help fight back the wave of emotion-driven legislation and local drone ordinances which are creating uncertainty about lawful, and unlawful, drone operations?

Interview Summary:  Brendan Schulman and commercial drone operators need team up to address the explosion in state & municipal drone laws seeking to limit or outlaw drone use.   Educating the public, local officials and state legislators about drones is essential.  Stopping states and municipalities from asking new laws is easier than having the laws declared invalid by a long court litigation process.  We need to work together to stop new laws before we end up with a patchwork of inconsistent rules which put a ‘chill’ on drone integration.  It is up to us to bring the ‘drones are good’ story to the world.  DJI can help.   Brendan Schulman’s best advice?  Meet you state and local legislators and educate them on drones.