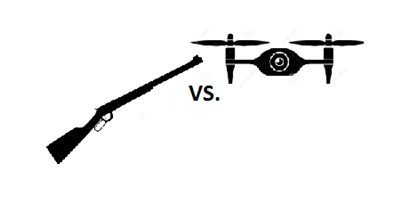 On July 26, 2015, Kentucky resident William Meredith aimed his shotgun at a drone flying over his property and pulled the trigger, sending the drone crashing towards the earth.  Meredith claimed that the drone had been recording footage of his daughters in the yard. Meredith commented: “‘You know, when you’re in your own property, within a six-foot privacy fence, you have the expectation of privacy.’” While Meredith was criminally charged for the incident, a Kentucky state Judge dismissed the charges, ruling that Meredith “had a right to shoot at the drone . . . .”

Who owns the air above your yard?

Now, the drone operator David Boggs has filed a complaint in federal court seeking a declaratory judgment that flying his drone above Meredith’s property “did not violate [Meredith’s] reasonable expectation of privacy” and that property owners “cannot shoot at [drones] operating in navigable airspace . . . .”  Boggs argues that he “he was approximately 200 feet above the property at the time [his drone] was shot down and that he neither viewed nor recorded the defendant’s property.”  With these questions now before a federal court, the rights of drone operators and property owners can hopefully be clarified to prevent future similar disputes.

If the FAA says I can fly, Can a private person or state say I can’t?

Boggs’ lawsuit stirs up issues directly relating to federal preemption and whether the FAA’s laws pertaining to navigable airspace trump state law privacy actions.  The Supreme Court has previously ruled on the topic of manned aircrafts flying over private property in Florida v. Riley, 488 U.S. 455 (1989).  In Riley, the Court held that viewing private property from a manned helicopter he navigable airspace did not violate the property owner’s reasonable expectation of privacy.  If the federal court applies this precedent to unmanned drones, then the issue could potentially be decided in Boggs’ favor.

In addition to the privacy concerns, the case also tackles whether drones should be considered an “aircraft” for purposes of federal law, which makes it a felony to “set[] fire to, damage[], destroy[], disable[] or wreck[] any aircraft” in the navigable airspace.  Should the court apply this prohibition to drones, then shooting down drones would be illegal and Boggs may be able to collect damages from Meredith.

However the Court decides to interpret the law and precedent, they must weigh it against the right of privacy, something highly valued in the United States.  Whatever the ultimate outcome, one thing is for certain: in order for drone operators and property owners to peacefully co-exist, some balance and clarity must be achieved.  Dronelaw.pro will follow the case as it unfolds and if you have any questions pertaining to your personal drone usage, contact one of the Dronelaw.pro attorneys today.