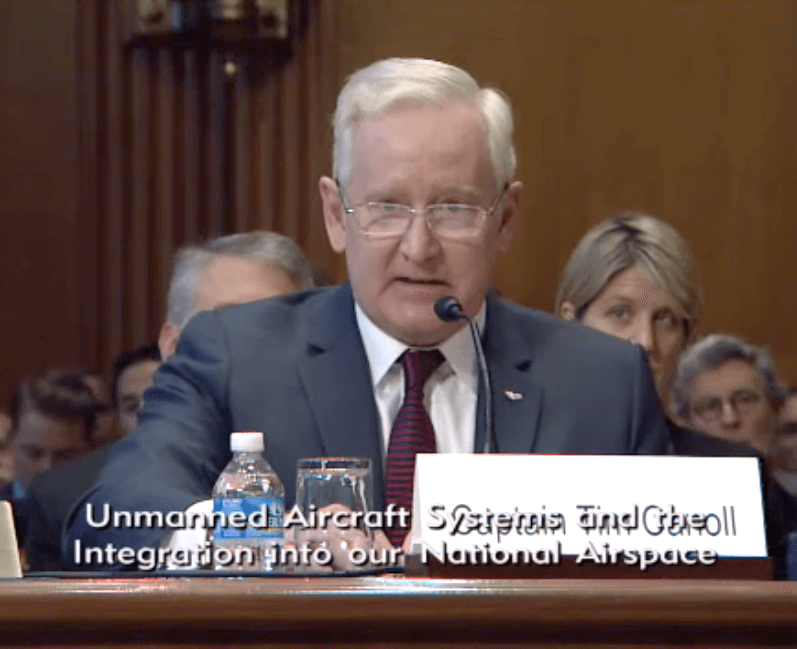 Do you ever wonder what Washington DC regulators are thinking about for the next round of drone regulations? U.S. Senator Susan Collins (R-Maine), Chairman Subcommittee on Transportation, Housing and Urban Development leads the charge at this Senate Committee on Appropriations hearing on “Integrating Unmanned Aircraft Systems Technology into the National Airspace System”

The subcommittee will come to order. Today, we are holding a hearing to discuss the use of unmanned aircraft systems, also known as drones, in our national airspace. I want to welcome our three witnesses: FAA Administrator Michael Huerta, Marty Rogers, the Deputy Director of ASSURE, which is the Alliance for System Safety of U.A.S. through Research Excellence, and Captain Tim Canoll, the president of the Air Line Pilots Association, who has brought with him one of the more popular drone sold today for recreational use. This is the same type of drone that landed on the White House lawn earlier this year.

There have been a number of troubling incidents with drones coming in close proximity to aircraft flying near our nation’s airports, as well as other dangerous instances affecting the safety and well-being of people on the ground. Let me just highlight a few of recent headlines that describe the problem:

These are just a few examples of irresponsible operators flying drones and demonstrate, in my judgement, the need for more education and regulation.

Captain Canoll will be testifying on the pilots’ perspective on how we can safely integrate unmanned aircraft systems, and we will hear some examples of near misses that pilots have experienced.

Pilot reports of unmanned aircraft have increased dramatically over the past year, an issue the FAA must take very seriously as it maintains the world’s safest aviation system. According to the FAA, there were 764 possible encounters with unmanned aircraft reported by pilots or airport personnel between November 2014 and August 2015 across the country, including in my State of Maine. In keeping with its mission, the FAA must act to counter the potential threat of “rogue drones” and the harm they pose to aircraft and passengers.

ES Comments:  Rogue drones!  It is true.  We need to get a handle on unsafe drone use. Education and technology solutions will be key.

As these unmanned vehicles become more common, it is likely that the number of harmful incidents will only increase. This calculation becomes quite daunting when you consider the FAA’s recent announcement that it expects one million drones to be purchased before Christmas this year. And that is not taking into account the estimated 700,000 drones that have been purchased to date.

ES Comments:  The collision between a UAV / drone and an airplane is not a question of ‘if’ but ‘when.’

While this emerging technology presents some unique challenges, especially as its use becomes more widespread, I do want to acknowledge the myriad benefits unmanned aircraft systems can provide. For example, unmanned aircraft can help first responders battle fires, detect chemical, biological and nuclear hazards, and navigate other areas too dangerous for people to tackle themselves. They also help inspectors monitor our nation’s railroads and pipelines, thereby improving safety across our transportation network. Furthermore, drones can assist disaster recovery efforts by improving damage assessment and providing needed supplies more efficiently.

ES Comments: Drones are good.  And they have the ability to provide commercial benefits, save lives and move innovation forward. That is why the US Government and FAA are trying to move drone regulations forward.

In addition to these critical benefits, drones are projected to have a substantial impact on our economy by creating jobs and increasing efficiencies in various industries. For example, drones can help farmers monitor crop growth and diseases and more precisely target fertilizers and pesticides. They are also supplementing helicopters in the news and the film industry, and may even be able to deliver packages more affordably, more quickly, and with less risk than current means. In fact, according to the Association for Unmanned Vehicle Systems International, the manufacturing and operations of drones will create more than 70,000 jobs in the first three years after their integration into our national airspace system.

ES Comments:  Every new technology creates challenges.  And safety concerns.  We need to make sure we don’t over-react to the safety concerns with bad regulations that don’t solve problems.  A lithium battery can do a lot of damage if it is sucked into an engine.  So that is serious stuff.  We all need to work hard to encourage safe flight.

So, it is evident that we need to strike a balance in the regulation of unmanned aircraft systems that recognizes their legitimate uses by responsible owners versus the dangerous intrusions caused by irresponsible operators.

I look forward to hearing the testimony of Mr. Rogers as he identifies ongoing research on the groundbreaking ways unmanned aircraft are being used as well as how technology, such as geo-fencing, which I am particularly interested in, can play an important role in preventing potential disasters. As technology advances, the FAA must ensure that its priority of protecting the flying public does not stifle innovation. Yet, we cannot allow the excitement of these potential benefits to distract us from the important work that must still be done to maintain safety in the air as well as on the ground. That has to be priority number one.

Another issues of concern to the public are the privacy implications of drones. Virtually everyone would welcome the presence of a drone that helps to locate a lost child in the deep woods. Yet, many would not want a drone to be used to photograph individuals entering and leaving their homes.

ES Comments:  Privacy concerns are one issue that tends to drive the drone debate.  But smart phones present much more potential for privacy abuse. Drones are noisy, large and really can’t be used to spy. Flying over private property is a legitimate concern, which remains unresolved by state courts and legislature.

As the FAA moves forward, collaboration with local, state, and other federal officials is essential. It is equally important to better educate the public and make certain that drone operators have the necessary information at their fingertips. The FAA’s campaign “Know Before You Fly” is a step in the right direction as is the recent announcement by Secretary Foxx and Administrator Huerta regarding the registration of drones.

I look forward to exploring all of these important issues with our witnesses this morning.