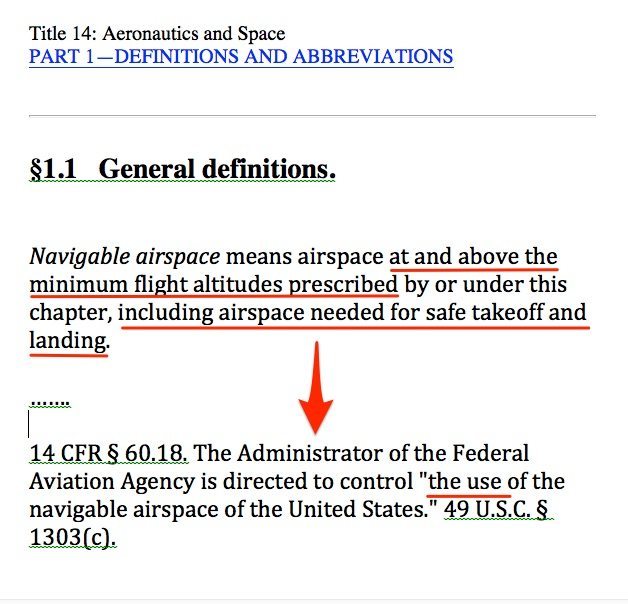 SkyPan Responds to FAA $1.9 Million Dollar Civil Penalty Letter on its website.   SkyPan’s public relations statements is pretty cryptic.  However, it appears that SkyPan’s  legal arguments will include an argument that the FAA lacks authority to regulate sUAS below the navigable airspace.

Can the FAA Regulate drones below 500 feet?

We previous posted about the SkyPan FAA enforcement / civil penalty letter and the specific aviation regulations at issue here and here. We break down the FAA’s enforcement history against SkyPan and SkyPan’s response to the FAA in the video below.

A $1.9 Million dollar suggested FAA fine for unlawful drone operation without a Section 333 requires a legal response, if for no other reason, negotiation leverage. However, the size of the fine could suggest a full legal challenge.  While the Pinker case challenged whether a drone was an ‘aircraft’ under federal aviation regulations, SkyPan appears to be ready to argue something almost as dramatic;  that the FAA has not authority to regulate sUAS flying below a certain altitude (depending on airspace) and outside the landing or take off flight path to and from airports.

What to read the FAA subpoenas to SkyPan and SkyPan’s customers?

Welcome to DroneLaw.Pro where we break it down for you everything SUAS. Today we’re going to be talking about Sky Pan International’s response to the FAA enforcement letter, the civil penalty letter with a proposed $1.9M fine.

So just to recap, the FAA did an investigation and they found that between 2012 and 2014 there were over 40 flights that the FAA believed were in violation of the Federal Aviation Regulations. The investigation took a long time but eventually spit out a number of findings. Because Sky Pan did not have a Section 333 Exemption, it had to comply with all of the Federal Aviation Regulations, many of which really can’t be complied with with an SUAS and then spit out some findings which really amount to careless or reckless operation within the NAS the National Air Space.

Sky Pan on its website posted a response to the FAA and it lists out a number of items which it is putting in play as part of its response. We’ll take a look at each one. You’ll see that the very first one is essentially that Sky Pan is good for business. Now that’s not much of a legal offense but they’re making the policy argument, keep in mind that under Section 333 in order to get an exemption, the FAA has to find good cause that the operation enabled by the exemption is in the public interest. So they’re essentially saying here that hey, we’re safe and we’re a good company and we shouldn’t be penalized. It’s a policy argument.

So beyond the policy argument, they talk at length about their long history of providing great photography for leading customers and they talk about their time tested safety protocols and procedures, their technology and their flight systems and the fact that they work for leading companies. Essentially, this is a customer loves us type argument which isn’t going to get anywhere with the FAA but makes for really good public relations when you’re doing damage control in a situation like this because I’m sure their customers are pushing back on what happened here.

Sky Pan is putting out some press release type items that are for public relations and our goal is to take a look and find out what they’re really doing here on the legal side to get some insights. This is where it gets interesting undersea. They start making legal arguments that they’re operating in what they call privately owned airspace which is an interesting argument. They’re saying they are above private property and therefore, they are flying safe. That they’re not in the navigable airspace that is regulated by the FAA and if they’re not in navigable airspace, then the FAA has no jurisdiction. Then they talk about the airworthiness of their aircraft which wouldn’t really matter I guess if they weren’t in navigable airspace which was within the reach of the FAA.

So let’s talk a little bit about how we got here. The FAA started investigation against Sky Pan back in 2012. They ultimately issued subpoenas so as a Section 333 customer you should be aware of how this could work if you get pulled in on an investigation. They initially issued subpoenas to Sky Pan itself asking, of course, for any information, but then they started to target Sky Pan’s customers like Macklowe Properties in New York so while Sky Pan objected to providing information, Macklowe, the customer, of course, spoke to the FAA and identified documents and emails and invoices and all the types of records that eventually came back to haunt Sky Pan because even if Sky Pan hadn’t been able to fight some of this information, your Section 333 customers are also going to be the target of an investigation. These things are typically pretty visible. So you’ll see some declarations here by some FAA attorneys and administrators which kind of detail the history. There was a preliminary investigation based on an anonymous tip, and they issued subpoenas to get emails and all communications relating to Sky Pan’s commercial drone activities or helicopter activities. Sky Pan sent letters back to the FAA saying they wouldn’t comply with the subpoenas. Sky Pan eventually was the subject of another complaint by a third party. We don’t know who that party was complaining about the flight that Sky Pan was making and in February 2012 in another anonymous complaint was issues against Sky Pan. A big risk for you folks, your competitors coming out and then based on these complaints, they started talking to Sky Pan’s customers. Mr. Dubrow from Macklowe Properties, one of the customers, started providing information to the FAA indicating that flights were occurring up to 1400 ATL with unmanned aerial systems allegedly. So we start to see how this case was put together and how this investigation started to evolve. We have more declarations by the safety inspector of the FAA and it talks a little bit about opening the investigation in 2012 and here’s the interesting thing, after they find out there is a problem, the FAA sent letters to Sky Pan, the purpose of which was to educate them, not to bring enforcement. So they provided them all of the regulations and these types of things and apparently Mr. Segall allegedly agreed with the FAA that Sky Pan would cease using UAS or SUAS for these commercial activities. This is March/April 2012. Ultimately, based on some more anonymous phone calls to the FAA, Mr. Dubrow, the customer from Macklowe Properties, started telling the FAA about these flights which occurred after Sky Pan had apparently had agreed to cease and desist.

Let’s talk a little bit about the Perker case, which is really where some of the initial fight with the FAA over their authority began and essentially the FAA brought a $10,000 fine against Rafael Perker alleging that he was engaging in reckless flights within the NAS and the fundamental issue in that case was whether or not, at least from the NTSP standpoint, whether or not a drone was an aircraft under the FAA rules. The court eventually determined that the definition of an aircraft would be the controlling issue in the case, and they took a look at the CFRs and determined that an aircraft is any devices used for flight in the air and their conclusion essentially was that a drone or an SUAS was an aircraft, manned or unmanned.   When we get to this concept of private airspace and that argument that we now see Sky Pan making, this appears to be a new attack on the FAA’s authority to regulate drones.

If you’re flying above airspace that’s not navigable airspace, then theoretically, the FAA wouldn’t be able to fine you. So what is navigable airspace? Under Title 14.1.1, under general definitions, it’s any airspace at or above the minimum altitudes prescribed under the rules which are about 1,000 feet in many instances including airspace needed for safe takeoff and landing. It is at or above minimum flight altitudes, let’s say in our argument it’s 1,000 feet, including airspace needed for safe takeoff and landing which would be anything on a flight path toward an aircraft, toward an airport facility. What we’re seeing here is a beginning a legal argument that we can anticipate that we are going to start seeing from Sky Pan about whether or not the FAA has any authority.

Now we get back into some more fluffy non-legal type arguments that Sky Pan makes on their website. They say, hey, we started working with the FAA a long time ago about getting permission that they belong to a number of trade associations and that they respect the safe flight rules, that they’re a market leader in RC helicopter photography in the country with really high end clients and have done $55B in real estate development and that they want to comply with the safe flight parameters that the industry has put out. So these aren’t necessarily going to be legal arguments, they’re equities arguments.

So if you have a Section 333 exemption then you want to comply. If you don’t have a Section 333, then you to be aware of how a regulatory action might proceed against you and how the FAA goes about conducting an investigation for unsafe flight.

That’ll do it for this episode of DroneLawPro. We will see you next time. Until then, fly safe.

More information about the FAA’s authority to regulate the navigable airspace.