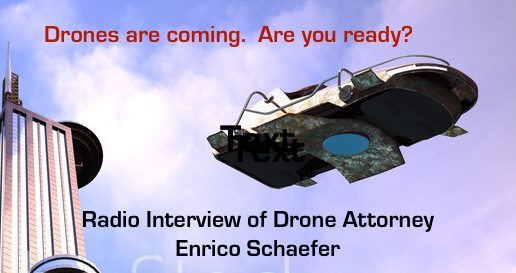 Drone law expert attorney Enrico Schaefer is interviewed on 1240 WJIM Radio in Lansing Michigan concerning the commercial and recreational use of drones in the United States.

Listen to the show below and let us know what your thoughts and comments are. If you are member of the news media and would like to orange an interview of one of our drone experts, contact us at our drone media page for more information.

Steve Gruber: You see these things everywhere and you hear a lot about them. People are debating good, bad, somewhere in the middle, all of the above. I am talking about drones, of course. Flying ourselves some great pictures of a couple of houses that burned in Flint. I mean, unfortunately for the houses, but the Fire Marshall had to get a bird’s eye look at the two house that burned in Flint here in the last couple of days and have a chance to look at possibly arson and other things. For law enforcement, it can be great but also it can be used by people that have other ideas. It can harass people. It can, you know, cause problems. It can go places frankly that they don’t belong and here to talk more about it is Enrico Schaefer from Traverse Law specializing in technology law. And the Federal Aviation Administration stepping in because these drones are all over, including right here in Northern Michigan.

Enrico Schaefer: Hey Steve.  How are you doing this morning?

Steve Gruber:  I am doing well.  It is a beautiful Northern Michigan morning.  You probably know that?

Drone Use and Accessibility

Steve Gruber:  Yeah, it is here and I am watching the day break here in Petoskey.  We could get a little rain today but it might be a little windy for the drones today, but these things are becoming, you know, ubiquitous with all sorts of events whether it is a parades or homecoming events or football games.  And the rules when it comes to places like the nation’s capital or the state capital in Lansing, I mean, these things have a use but unless they are kept under control, people don’t seem to understand that they should follow some decorum, I guess.

Enrico Schaefer:  Yeah, the real issue is that the technology is so sophisticated and at a price point about $400.  You can get a DJI drone that will fly, it will take pictures, it will connect to satellites, and in a lot of ways, it is bullet proof, right, which makes it really easy for anyone to fly, but just because you can fly does not mean that you should fly.

Steve Gruber:  That is the point I am making.  I agree with you there and there is all sorts.  As these things go, Enrico, of course, they are getting more sophisticated.  The price is coming down making them more accessible to a lot more people and they are a lot more advance than they were even a couple of years ago.  I saw one online here a couple of months ago, my wife and I, I think it is called Lily.  You just throw the thing into the air and it will follow you around until it runs out of gas or juice or whatever.  And you could figure out how to follow all sorts of people in cars, on motorcycles, into the back woods.  You could literally this time of year now being summer, you could fly drones over people’s houses because the ladies are laying out in bikinis.  You can do all sorts of things that are maybe legal but inappropriate.

Enrico Schaefer:  Yeah.  Like the cell phone technology at the time say 10 years when they started putting cameras in cell phones, this was a very similar issue, and ultimately the benefits of the cell phone overwhelmed the potential for abuse and you recall, I am sure Steve, when we had these debates on should cell phones be allowed in bathrooms and locker rooms?  Well, okay, that ship has sailed, right?  And so we are going to have to wait and see how the drone market responds to these privacy concerns versus the potential benefits that drones can deliver.  Are the headlines going to be ‘Drones saves lost boy in woods’ or ‘Drone crashes into crowd at the Joan Jett concert at the Cherry Festival’?

Steve Gruber:  Right.  And these things happen.  I use drones myself because I do outdoor television in addition to the radio here and it is a fabulous tool to get great video of rivers and streams and trees and wildlife from a distance.  You get all sorts of fabulous views.  National Geographic type video that you normally wouldn’t get but you are right.  Then one goes crashing into a crowd and what happens is, “Well, let’s just band them all” will be the knee-jerk reaction from some politicians, which I don’t think is appropriate either.

Enrico Schaefer:  No and it is … there is an element of society that every time you post something on Facebook about drones, there is one person who says that if a drone flies over my yard, I am going to shoot it down.  Now what people need to understand is a drone is defined as an aircraft by the FAA and it would be no different than shooting down or shooting at an aircraft.  We are talking about a big time felony.  But the sentiment that “hey, not on my property”, “not over my yard”, “not if it can see me” is a very vocal minority out there and, of course, we all have concerns about especially the recreational use of drones which is much less regulated by the FAA than the commercial use of drones, which is still highly regulated.

Steve Gruber:  Well, privacy concerns, we can’t dismiss those to easily.  I mean the privacy concerns of individuals who don’t want drones over their house, I think that is a reasonable concern especially when it is one thing.  In southern Michigan, we see the helicopters out about this time of year that are cruising around looking for marijuana fields.  Okay, we get that.  It has gone on my entire life and that is the law enforcement.  But if your neighbor is flying over your house to harass you or peek at your whatever, I can see the guys inclination to grab a 12 gauge Benelli and roast the thing.

Enrico Schaefer:  Right and one of the fascinating things here is that what do the police do in that situation because the airspace above your yard is part of the FAA’s territory.  It is part of the national air space so you don’t necessarily own up to the heaven’s above your yard.  Well, how far do you own?  And there is no good court case and there is no good state law which tells us, answers that question.  So, while there is no question if I have  commercial Section 333 Exemption to fly my drone in the national airspace issued by the FAA, there is a point in which I can fly over your yard and the FAA has granted me that permission.  And all these legal issues are going to have to be worked out over time and the local police are really going to have a challenge trying to figure out what to enforce and how to enforce.  It is just different than if someone comes physically onto your property where it is pretty clear that the police has jurisdiction and it is pretty clear that what was going to happen in that situation.  We just don’t know with drones how all of this is going to go down and my guess is that different jurisdictions, different states, cities, municipalities are going to handle drones in lots of different ways and so there is going to be a lot of unknowns for drone operators as well.

Steve Gruber:  Yeah.  In fact, one city in Wyoming handed out tags to shoot drones so you could hunt it like a bird. Enrico Schaefer on the line from Traverse Legal specializing in technology law.  I guess all these are going to have to be addressed but I hope that we don’t get an over correction and limitation on drones to early in the conversation, which could of happened with cell phones like you pointed out here a moment ago and, thankfully, it did not because the benefit is far outweighed any concerns we have.  And have people miss use cell phones, sure they do it every day.  But overall, like you said, the benefit of cell phones, at least for the most part has been positive.

Drones/UAVs are the Next Big Technology

Enrico Schaefer: Yeah and the benefit of drones is going to be absolutely staggering.  There are people, Steve, who think that drones are the next big technology since the intervention of the internet itself and that they will become … the benefits of drone use will become will be so overwhelming that the privacy concerns will go away and not only for police and fire, but search and rescue and for people to be able to use drones to help themselves personally.  You can’t use drones for hunting in the State of Michigan so it is interesting that are only state law on drones is  you can’t use them to hunt and you can’t interfere with someone hunting using drones, but there are going to be more state laws that come down the pipe and our state legislature, Michigan, is going to have to figure out where they want to drawn the line and then the question will be, “How much jurisdiction does Michigan have…”

Steve Gruber: That is quite a bit.  Enrico, we’ve got to leave it there.  Enrico Schaefer, we have to leave it there my friend.  Thank you so much for the great conversation from Traverse Legal.  We will talk soon, Enrico.

Enrico Schaefer:   Thanks Steve, have a great day.