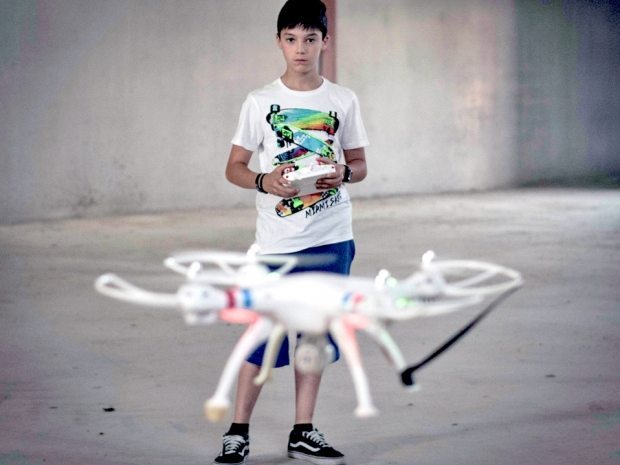 There is uncertainty in the model aircraft community about when an unmam1ed aircraft is a model aircraft operated for hobby or recreation or is an operation requiring FAA authorization. The FAA has received many inquiries from students and educational institutions offering coursework in the design, construction and operation of small unmanned aircraft with respect to the types of activities in which students and faculty lawfully may engage pursuant to the existing legal framework

In light of these questions, we are issuing this interpretation to clarify that:

A person may operate an unmanned aircraft for hobby or recreation in accordance with section 336 of the FAA Modernization and Reform Act of 2012 (FMRA) 1 at educational institutions and community-sponsored events2 provided that person is (1) not compensated, or (2) any compensation received is neither directly nor incidentally related to that person’s operation of the aircraft at such events;

A student may conduct model aircraft operations in accordance with section 336 of the FMRA in furtherance of his or her aviation-related education at an accredited educational institution.

Faculty teaching aviation-related courses at accredited educational institutions may assist · students who are operating a model aircraft under section 336 and in connection with a course that requires such operations, provided the student maintains operational control of the model aircraft such that the faculty member’s manipulation of the model aircraft’s controls is incidental and secondary to the student’s (e.g., the faculty member steps-in to regain control in the event the student begins to lose control, to terminate the flight, etc.).

Separate from these two actions, the FAA continues to receive a number of questions on the use of model aircraft to conduct demonstrations and on student use of model aircraft in connection with paiticipation in coursework at educational institutions. The FAA finds it necessary to clarify the applicability of section 336 of the FMRA and of the FAA’s operating requirements for UAS. The FAA recognizes that UAS increasingly are being used in education, including science, technology, education, and math (STEM) education, which is the focus of President Obama’s Educate to Innovate Initiative.4

Hobbyist Use of UAS to Conduct Demonstrations

Section 336(a) of the FMRA provides special rules for model aircraft that require the aircraft to be:

Flown strictly for hobby or recreational use;

Operated in accordance with a commm1ity-based set of safety guidelines and within the programming of a nationwide community-based organization;

Limited to not more than 55 pounds unless otherwise certified through a design, construction, inspection, flight test, and operational safety program administered by a community-based organization;

Operated in a manner that does not interfere ,vith and gives way to any manned aircraft; and

If an unmanned aircraft is operated as a model aircraft in accordance with the above, then it is does not require FAA authorization. A key element in determining whether an operation may qualify as a model aircraft operation is that it must be flown for “hobby or recreational” purposes. 5 The FAA’s interpretation of section 336 relies on common definitions of the terms “hobby” and “recreational.” Previous agency guidance addressed the parameters of hobby or recreational use:

The FAA interprets “hobby or recreational” use to include operation of UAS to conduct demonstrations at accredited educational institutions or at other community-sponsored events provided the aircraft is not being operated for compensation, in furtherance of a business or incidental to a business. Therefore, a model aircraft hobbyist or enthusiast lawfully may fly UAS at accredited educational institutions or other community-sponsored events to promote the safe use of UAS and encourage student interest in aviation as a hobby or for recreational purposes provided the hobbyist receives no compensation of any form (including honorarium or reimbursement of costs), or any such compensation neither directly nor indirectly furthers the hobbyist’s business or operation of the UAS and he or she follows the provisions of section 336.

Each of these three methods is available to educational institutions (including their faculty and students) that want to operate UAS, including for commercial, research and development, and any other non-hobby or non-recreational purpose. Each, however, requires the educational

5 P.L. 112-95, § 336(a)(l) and (c)(3).
6 79 Fed. Reg. at 36174
7 On February 23, 2015 the FAA proposed a rule that, when finalized, will provide a framework for small UAS operations. See Operation and Certification of Small Unmanned Aircraft Systems Notice of Proposed Rulemaking, 80 Fed. Reg. 9544.
institution or its faculty and students to meet statutory prerequisites and obtain from the FAA the requisite approvals (in the form of exemptions and COAs).

Many educational institutions are keenly interested in having students operate unmanned aircraft as model aircraft under section 336 of the FMRA in connection with their academic coursework at those schools. The educational community contends that these operations not only meet the definition of model aircraft but also meet the unique need of students, which is learning how to design, construct and operate small um11anned aircraft8 as a component of a variety of science, technology and aviation-related educational curricula. Students also are interested in operating small unmanned aircraft for other educational purposes such as in connection with television, film, or photography courses.

The FAA has considered whether a student’s course work of learning how to operate and use a UAS constitutes a hobby or recreational activity within the meaning of section 336’s definition of model aircraft. The FAA believes students operating UAS as one component of a curricula pertaining to principles of flight, aerodynamics and airplane design and construction promotes UAS safe use and advances DAS-related knowledge, understanding and skills. UAS also may provide students a useful tool in other academic curricula such as television, film production or the arts generally. Although it may be argued that the student’s knowledge and skills obtained through such coursework are necessary for a diploma or degree, which subsequently can lead to an aviation-related job or increased earning potential, the FAA finds this link simply too attenuated to transform student UAS use, as a component of an accredited educational curriculum, into a non-hobby or non-recreational use within the meaning of section 336. A person that operates a UAS strictly for hobby or recreation learns about principles of flight, aerodynamics, and airplane construction may subsequently use such knowledge when gainfully employed, but that does not transfonn what is otherwise a hobby or recreational activity into a non-hobby or non-recreational pursuit.

Faculty Use of Model Aircraft

8 Small unmanned aircraft are those weighing less than 55 pounds. See FMRA § 331(6).
9 The prohibition on receiving compensation, while broad, does not preclude a student from operating UAS in connection with fulfilling a specific course’s requirement while also receiving financial aid, participating in work­ study programs or being a paid research assistant to a faculty member teaching such course.
The FAA recognizes that faculty participation in the student’s learning experience often is an
integral component of the student’s educational experience and that faculty should be able to participate in and contribute to the unmanned aircraft activities in which students can engage as hobbyists. However, a faculty member engaging in the operation of an unmanned aircraft, as part of professional duties for which he or she is paid, would not be engaging in a hobby or recreational activity. Rather, the faculty member is being compensated for his or her teaching or research activity, including any UAS operation arising from or related to the faculty member’s teaching a course or conducting research.

Likewise, a student operating UAS for research on behalf of a faculty member is associated with the faculty member’s professional duties and compensation and, thus, is not hobby or recreational use by the student pursuant to section 336. Student operation of UAS for the professional research objectives of faculty renders the operation non-hobby or non-recreational. Accordingly, a faculty member conducting research may not rely on section 336’s concept of “hobby or recreational use” to either operate a UAS or direct student UAS operations in connection with such research.

Nevertheless, faculty teaching a course or curricula that uses unmanned aircraft as a component of that course may provide limited assistance to students operating unmanned aircraft as part of that course without changing the character of the student’s operation as a hobby or recreational activity or requiring FAA authorization for the faculty member to operate. The FAA finds that de minimis limited instructor participation in student operation of UAS as part of coursework does not rise to the level of faculty conducting an operation outside of the hobby or recreation construct.

This limited circumstance would apply to courses at accredited institutions where the operation of the unmanned aircraft is secondary to the design and construction of the aircraft, such that the primary purpose of the course is not operating an unmanned aircraft. For example, an instructor teaching an engineering course in which construction and operation of UAS are one part of the curriculum would be able to conduct limited UAS operations. In that case students would fly UAS to test the validity of design or construction methods to show mastery of the principles of the course. The faculty member’s UAS operation would be secondary to the purpose of instructing engineering courses. Incontrast, this limited circumstance would not apply to a course related to UAS flight instruction. In that case, the student’s primary purpose for taking the course is to learn to fly a UAS and flight would be expected to be demonstrated on a regular basis. In that case, the faculty member’s UAS operation is closely tied to his or her purpose of instructing how to fly a UAS.

UAS may be used to conduct demonstrations at schools or other community-sponsored events provided the person operating the aircraft is (1) not compensated, or (2) any compensation received is neither directly nor incidentally related to that person’s operation of the aircraft at such events.

Students that operate model aircraft in connection with fulfilling an accredited educational institution’s curricula lawfully may conduct model aircraft operations for hobby and recreational
purposes pursuant to section 336 of the FMRA, provided they do not receive compensation,
directly or incidentally, arising from or related to such operations. Faculty at these educational institutions teaching such curricula may assist students with their model aircraft operations under section 336, provided that the operations are used to teach such curricula to students enrolled in those courses and the faculty member’s participation is limited to de minimis participation in the student’s UAS operations. We emphasize that these operations must be conducted under the provisions of section 336.

The FAA emphasizes that faculty members who wish to operate UAS outside of these parameters must seek authorization though one of the three methods discussed above. We also note that this interpretation was drafted prior to issuance of the final rule for Operation and Certification of Small UAS Rule and this interpretation may need to be revisited depending on its provisions. See 80 Fed. Reg. 9544 (Feb. 23, 2015) (Notice of Proposed Rulemaking).

Please contact my office with any questions about this memorandum.
…..