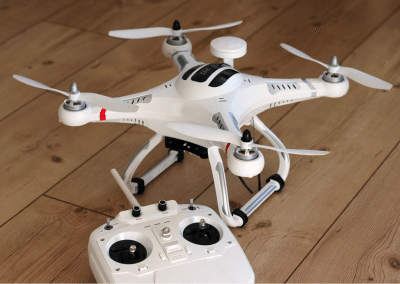 [This article is a contribution by Liz Greene. Liz is a dog loving, beard envying, pop culture geek from the beautiful city of trees, Boise, Idaho. You can catch up with her latest misadventures on Instant Lo or follow her on Twitter @LizVGreene].

If you’re one of the many people who received a drone for Christmas, it’s likely that you already took it on a maiden voyage around the living room (hopefully it’s still in one piece). However, before you depart on your first official flight, there are some important things to know about operating this fabulous piece of technology.

On December 14th, the FAA announced that all unmanned aircraft vehicles (UAVs) weighing more than 0.55 lb and less than 55 lb, purchased for use after December 21, 2015 must be registered before their first outdoor flight. Choosing not to register your craft brings a potential civil fine up to $27,500. Criminal penalties include fines that can go as high as $250,000 and the possibility of up to three years in prison.

Registration can be done via a streamlined, web based system on the FAA’s website. There are third party companies offering to complete registration for drone owners for a fee, but they’re best avoided as the FAA is only charging $5 for registration, and the process is easy to complete on your own. Furthermore, if you register between now and January 20, 2016, your $5 will be refunded.

There are multiple guidelines put forth by the FAA that are expected to be followed by all model UAV operators:

It’s also important to be aware of no drone zones, such as Washington D.C. and all 59 of the U.S. National Parks. You can see a complete map here.

Beyond the official guidelines, there are also basic courtesies you can extend to others while flying. Drones don’t have the best reputation among the general populace, and therefore their presence in public areas can ruffle feathers. When choosing a spot to fly, look for areas that aren’t occupied by large groups of people.

If you do decide to fly in a park, or on a beach, move to a less crowded area, away from picnickers and sunbathers. The noise of your UAV, coupled with the onboard camera, can be upsetting to people out enjoying their day. If you are confronted by an angry bystander, remain calm and polite, land your craft, and move on.

Your new drone is sure to bring you hours of enjoyment — but only if you operate it in a responsible and considerate manner. Register your craft, follow FAA guidelines, and be mindful of others. Otherwise, you’re bound to find yourself on the wrong side of the law.